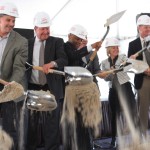 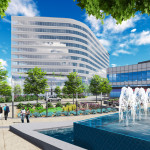 The Vision for Brighton Boulevard 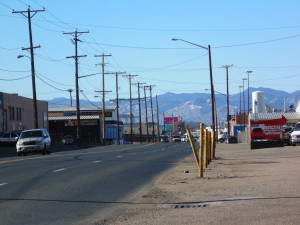 Photograph of the current streetscape along Brighton Boulevard. Image courtesy City of Denver.

It is easy to see that for RiNo to continue its progress, significant improvements need to be made to the streetscape. The City and County of Denver now has a plan in place to make these needed improvements a reality.

“As part of the North Denver Cornerstone Collaborative (NDCC), the Brighton Boulevard Corridor Redevelopment is a transformational project that provides an opportunity to create an inviting gateway to and from downtown Denver. It encourages innovative development that mixes the new with the old, and offers a genuinely unique experience for all,” wrote Denver Mayor Michael B. Hancock.

The vision for the Brighton Boulevard Redevelopment Plan is to create a safe and engaging multimodal corridor that will serve as a gateway to downtown Denver through a comprehensive improvement to the streetscape. The plan outlines improvements through the integration of bike lanes, sidewalks and well defined infrastructure to alleviate the ambiguity that currently exists between private and public space.  improved connectivity to Denver International Airport, the National Western Center and adjacent neighborhoods is also at the core of this redevelopment. The project aims to develop a return on investment and forge an area where people will not just pass through, but a corridor where people will shop, dine, and build a diverse mix of businesses. 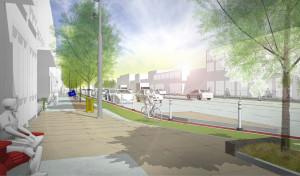 Rendering of the Brighton Boulevard with streetscape improvements. Image courtesy City of Denver.

Todd Wenskoski currently serves as the Deputy Director of the NDCC for the City and County of Denver and he stated to Denver Urban Review that great effort was put in place to connect with the community and include feedback into the design process of this plan.

“We partnered with the local community to create the best possible plan. The outreach efforts helped to create one vision and allowed us to address concerns,” said Wenskoski.

The plan outlines a focus on sustainability as LED traffic lights, recycled road base and light colored paving will be used to reduce the amount of heat absorbed during the day.

The urban island heat effect is particularly troublesome in the area. Brighton Boulevard has no tree canopy. The plan calls for a continuous tree canopy that will shade the streetscape. The urban island heating effect is the result of an unnatural absorption of solar energy due to a lack of vegetation. In other words, asphalt and concrete absorbs more heat than trees and grass. 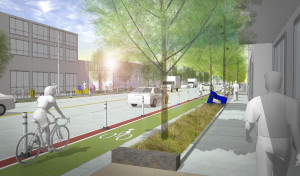 The City and County of Denver will provide $26 million towards the project and $3 million will come from the general improvement district.

Although no firm date is set for this project to begin, Wesnkoski stated that, “it could potentially get started late in 2015 with completion in 2017.”

For more information on the Brighton Boulevard redevelopment plan take a look at the executive summary.