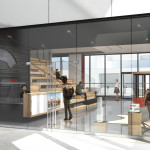 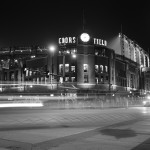 Denver International Airport (DIA) has announced that a five-piece painting exhibition by Denver-based artist, Charlene Goldman titled “Monolithic Orchestration,” will be on display through November at DIA. These paintings were inspired by the recent construction at DIA. 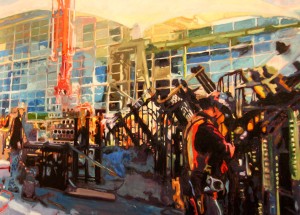 A 22.8 mile commuter rail line from Denver’s Union Station to DIA known as the East Line, is under development and is slated to begin operation in the spring of 2016. This rail line will utilize a different technology than RTD’s the light rail lines and is designed to carry passenger farther and faster than light rail. Trains will reach a top speed of 79 mph and will whisk passengers between downtown Denver and DIA in 35 minutes. Trains will run every 15 minutes during peak hours.

In conjunction with RTD’s new commuter rail line, is the development of the 519-room Westin Denver International Airport Hotel. This hotel project is currently under construction, but is nearing completion as an opening date is expected this November. 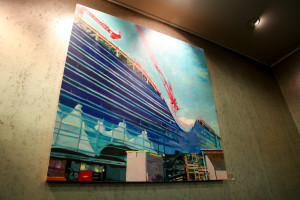 The East Line will deliver passengers to the Jeppesen Terminal- DIA’s main terminal. A 26,000 square foot conference center will be housed at the hotel and an 86,000 square foot public space will sit just outside of the hotel. The hotel was designed by the architecture firm Gensler and the general contractor on the project is Kiewit.

According to Goldman, the purpose of her artwork is to recreate abstract moments that convey the people, city, and the nation that contributed to the beauty of the new hotel and transit project.  Goldman focused specifically on the construction of the hotel and transit development because it allowed her to reflect on the architecture and design of the hotel as a piece of art.

Passengers and airport visitors may view the paintings during regular business hours without having to go through security, at the Airport Office Building lobby, which is west of the A-Bridge security checkpoint. 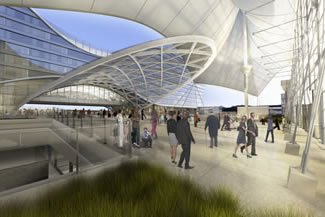 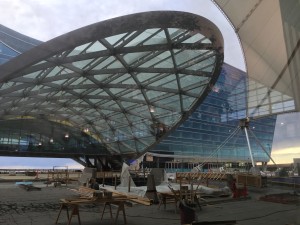