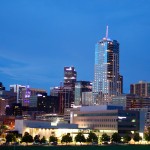 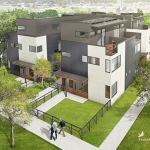 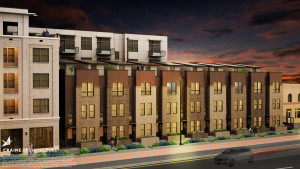 On Thursday representatives from the City of Denver and the development team of The Wheatley, a mixed-use development taking shape in Denver’s Five Points neighborhood at 25th Avenue and Welton Street, gathered on site to celebrate its construction.

This project will include 82 apartments with 64 for of those units at market rate, 14 townhomes and 3,800 square feet of retail space.

“Mixed-income developments that include affordable units for hard-working individuals and families are key to building healthy, vibrant communities,” Denver Mayor Michael B. Hancock said. “Through the Welton Challenge grant and our housing finance funds, we’re proud to have played a role in The Wheatley, shaping the continued revitalization of this great neighborhood and helping to keep Denver livable and affordable.” 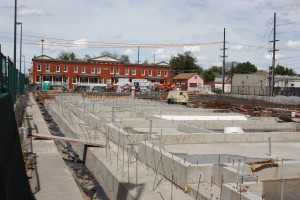 Construction site of the Wheatley May 2015.

The Denver Office of Economic Development (OED) named The Wheatley as one of five Welton Design/Development Challenge awarded projects in 2014. The program provided predevelopment funds to help spur smart development of the Welton corridor with jobs, housing and retail. In addition, the OED provided $475,000 in financing to help support the development of 18 affordable units at The Wheatley to households earning up to 80 percent of the area median income, as explained in a statement from the City of Denver.

Craine Architecture is the architect of record for this project. The developer is Palisade Partners and the general contractor is Confluence Builders. 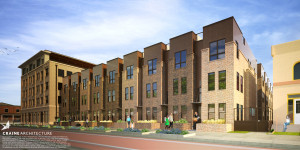 “This site has a rich history in Denver as it was once the home of the Wheatley YMCA which operated until 1964. It was named for Phillis Wheatley, a renowned African-American poet who lived between 1754 and 1784. We are honored to name our project after her, a freed slave who published poetry at the early age of 14,” stated Paul Books of Palisade Partners.

DUR first reported on this project in March and that article can be found here.