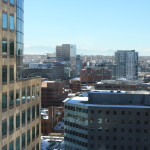 A 12-story Hilton Garden Inn is coming to Denver’s Union Station neighborhood. The project will be constructed at 20th Street and Chestnut Place.

This hotel is being developed by Focus Property Group. The general contractor for the project is Alliance Construction Solutions of Denver, and the architect of record is JG Johnson Architects which is also based in Denver.

Currently two structures are standing on the site. One is a building that once offered self storage units. This structure is slated for demolition.

The other structure is a designated Denver Historic Landmark that was used as a Denver fire station- Hose House #1. Constructed in 1883, Hose House #1 is the oldest continuously standing fire house in Denver. After its days as a fire house, the structure served various tenants and has sat unused since the 1980s.

Focus property will be renovating the Hose House into a restaurant space that will serve hotel guests as well as residents and visitors of the Union Station neighborhood. 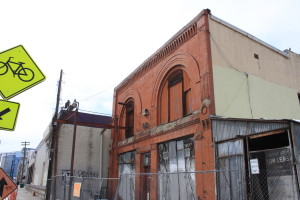 Hose House #1 built in 1883 will be restored and renovated into a space for a future restaurant and incorporated into the planned Hilton Garden Inn hotel development.

“Long abandoned and suffering from decay, we will painstakingly restore the historic structure, expose the original masonry that has been covered up by stucco and maintain and restore historic elements such as the original carriage doors. Other than Union Station itself, the Hose House is the only remaining historic building in the Union Station district and will provide a link to the area’s past and an important sense of place for this dynamic city center neighborhood,” said Josh Fine, vice president and general counsel of Focus Property Group.

This 214 room Hilton Garden Inn will feature a roof top amenity deck which will be used for events and will offer views of downtown Denver and nearby Coors Field. The building will also include 5,000 square feet of meeting and banquet space and an indoor pool.

Construction is slated to begin in May of this year with delivery expected in either the last quarter of 2016 or the first quarter of 2017. Denver’s Union Station neighborhood is a very active area for construction these days and this project will join serval residential, commercial and mixed-use developments that are currently under construction.

“Focus Property Group has been investing in downtown Denver for over 25 years. We believe in downtowns and particularly downtown Denver. The renewed Union Station neighborhood is the crown jewel of our urban core, with a 24-hour vibrancy that mixes office, residential, unique retail and multiple modes of transit. The new Hilton Garden Inn will add upscale select service hotel rooms to the hospitality offerings in Union Station, which is rapidly emerging as the neighborhood of choice for visitors to our city center,” said Fine.