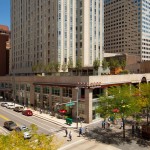 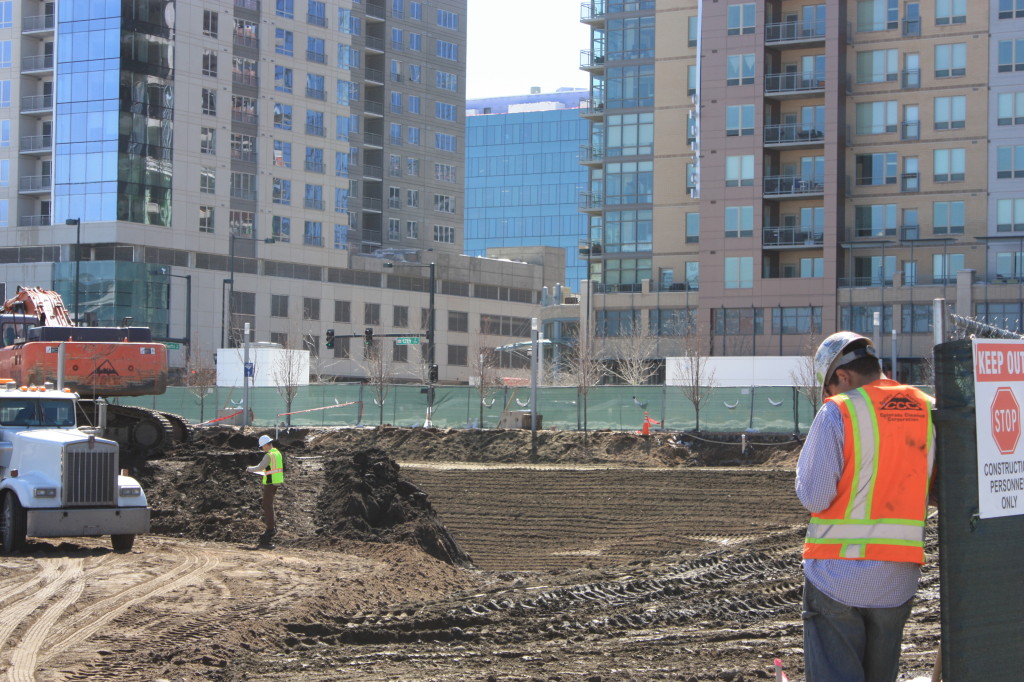 17W is now under construction at 17th Street and Wewatta. The project will be apartments and a Whole Foods is slated to occupy the first floor. 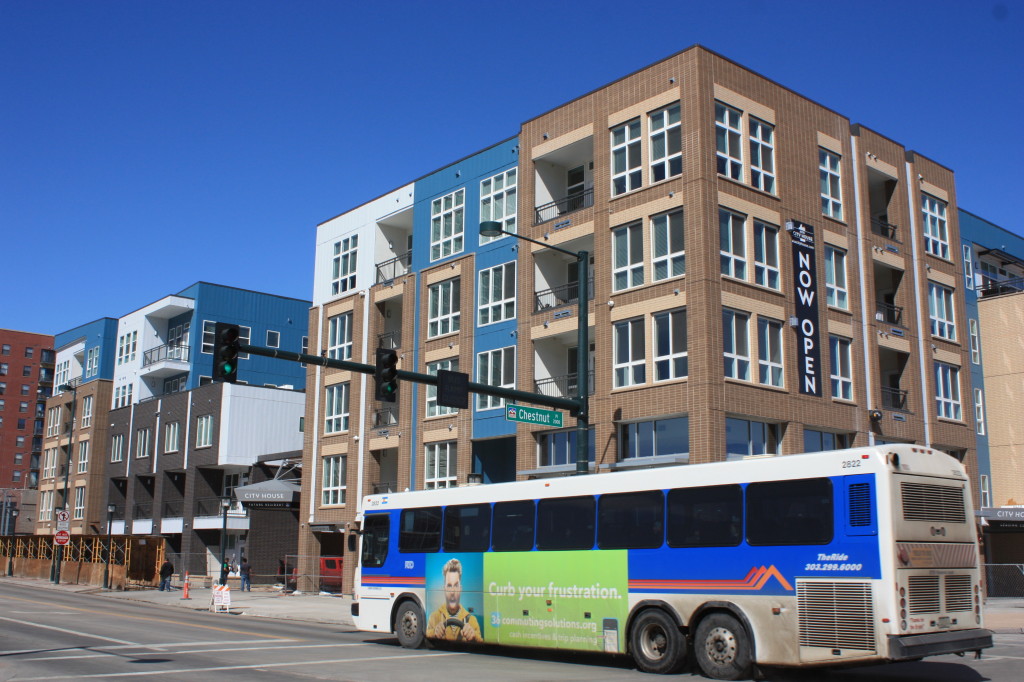 Alta City House located at 19th Street and Chestnut is nearing completion as an RTD bus passes by. 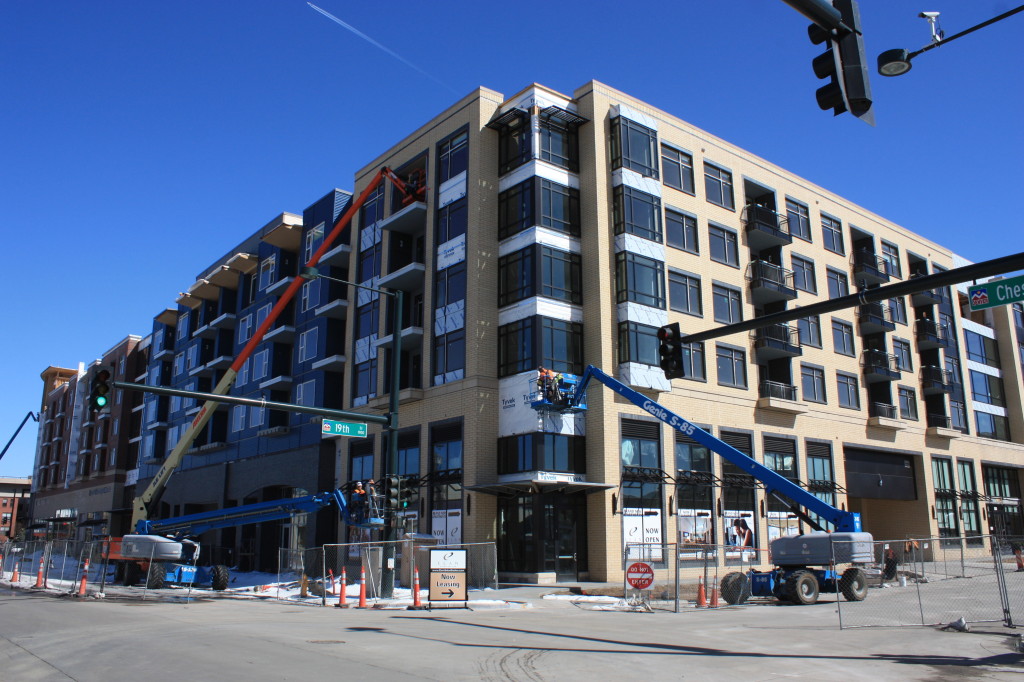 A King Soopers will be opening on the first floor of the Elan Union Station apartment project at 19th Street and Chestnut Place. 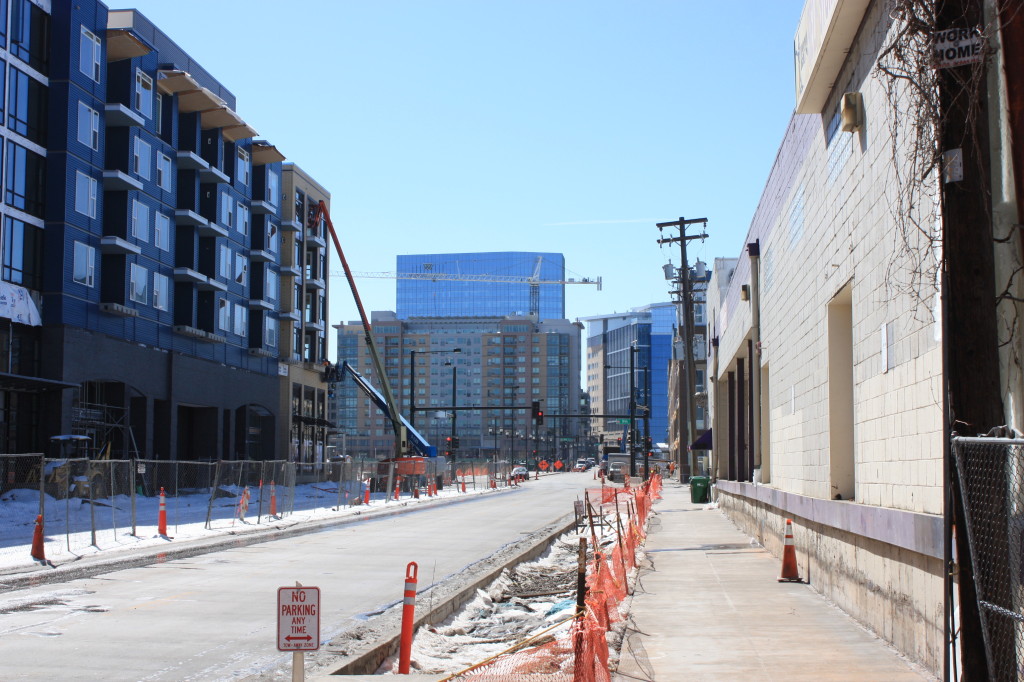 The above photo looks down Chestnut Place towards the southwest. The structure that sits on the righthand side of the photo was utilized as self storage building and is slated for demolition to make way for the planned 12-story Hilton Garden Inn. The structure on the lefthand side of the photo is northeast side of the Elan Union Station apartment project where the new King Soopers will be located. The 13-story building in the middle of the picture is the Cadence Union Station apartments. The crane is with the 1601 Wewatta office project that recently topped off at 10-stories. 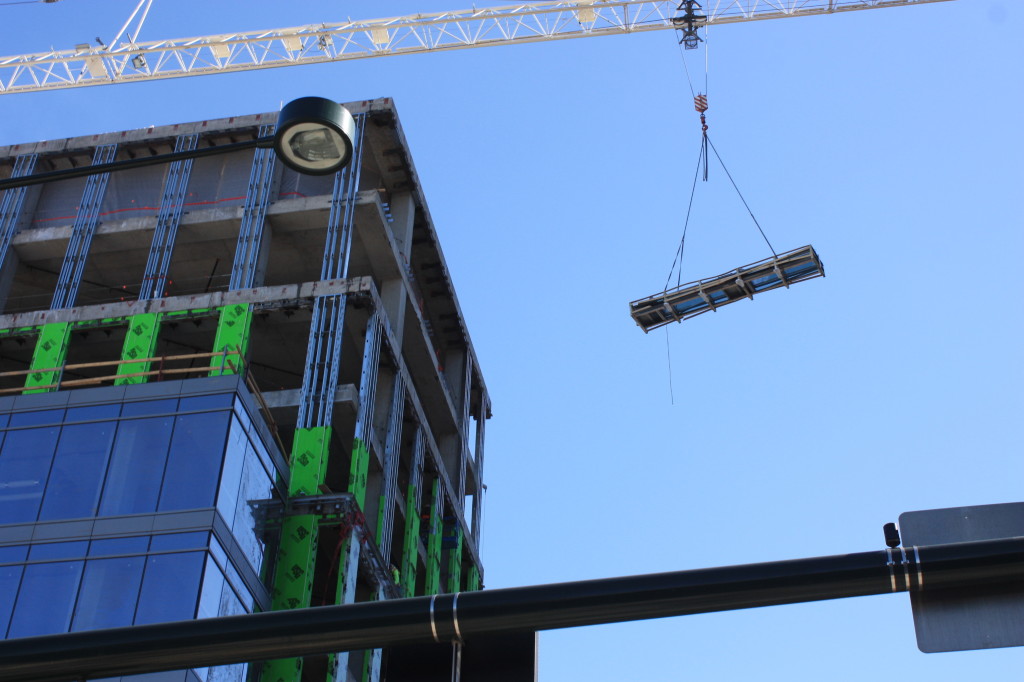 A crane delivers glass to the 1601 Wewatta office project that was developed by Hines. The glass has been stored in crates on an adjacent lot that is planned to become an 18-story office tower at the corner of 16th Street and Chestnut Place. 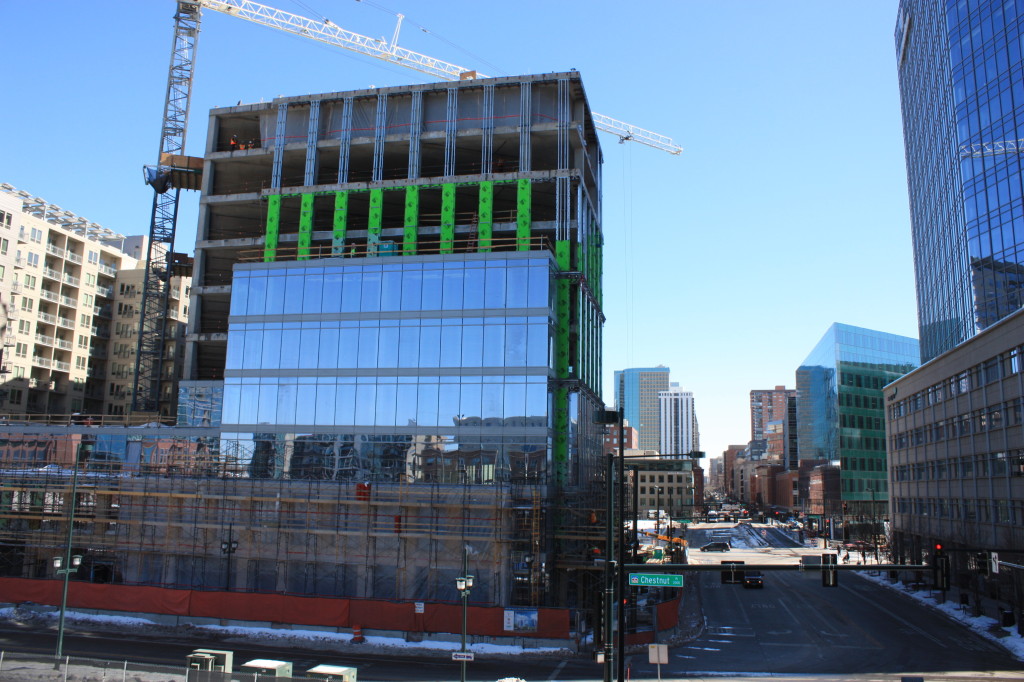 Photo of 1601 Wewatta looking southeast down the 16th Street Mall in the above photo. 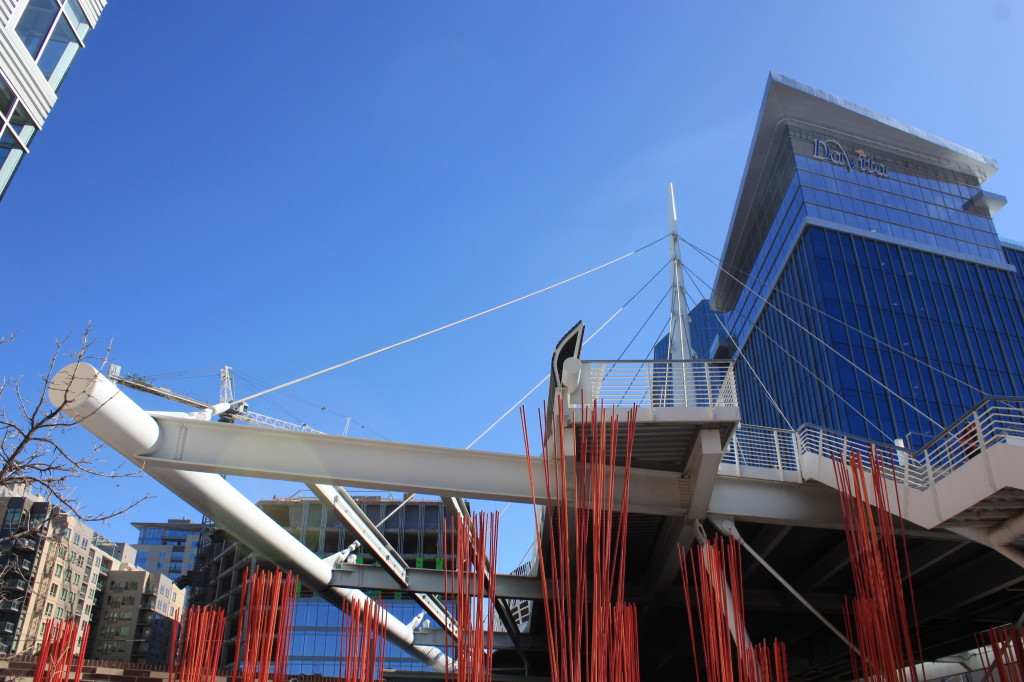 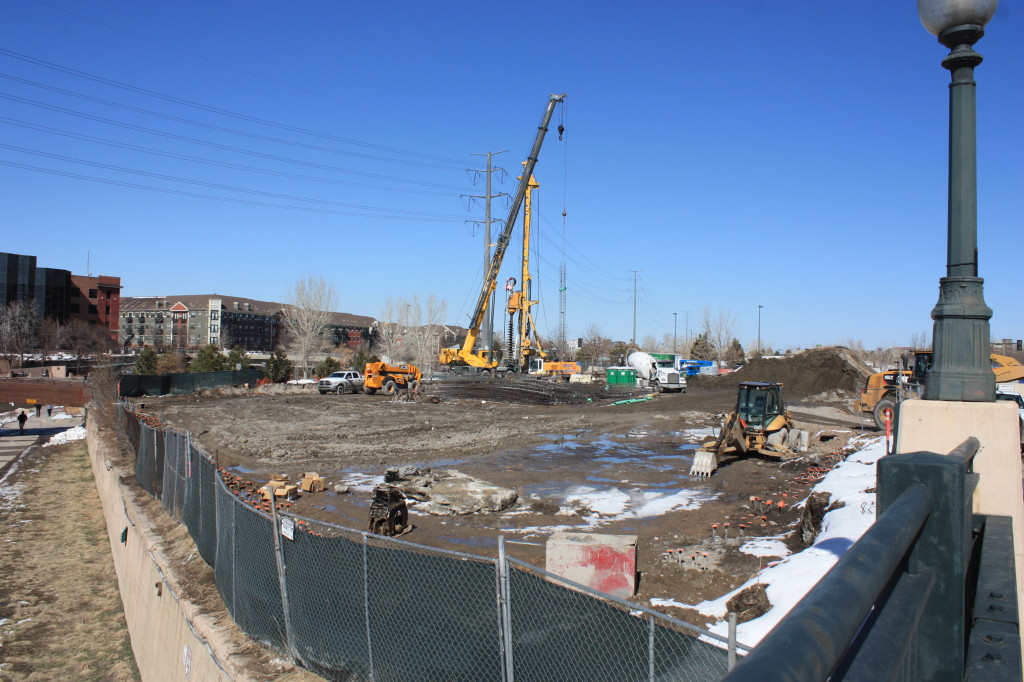 The Confluence, a 34-story luxury apartment building is under construction and if you are wondering where the name for this development came from, it is because this tower will rise adjacent to the confluence of the Platte River and Cherry Creek. This project will feature underground parking. Excavation work is underway, but a lot of work will take place before the above grade work begins. 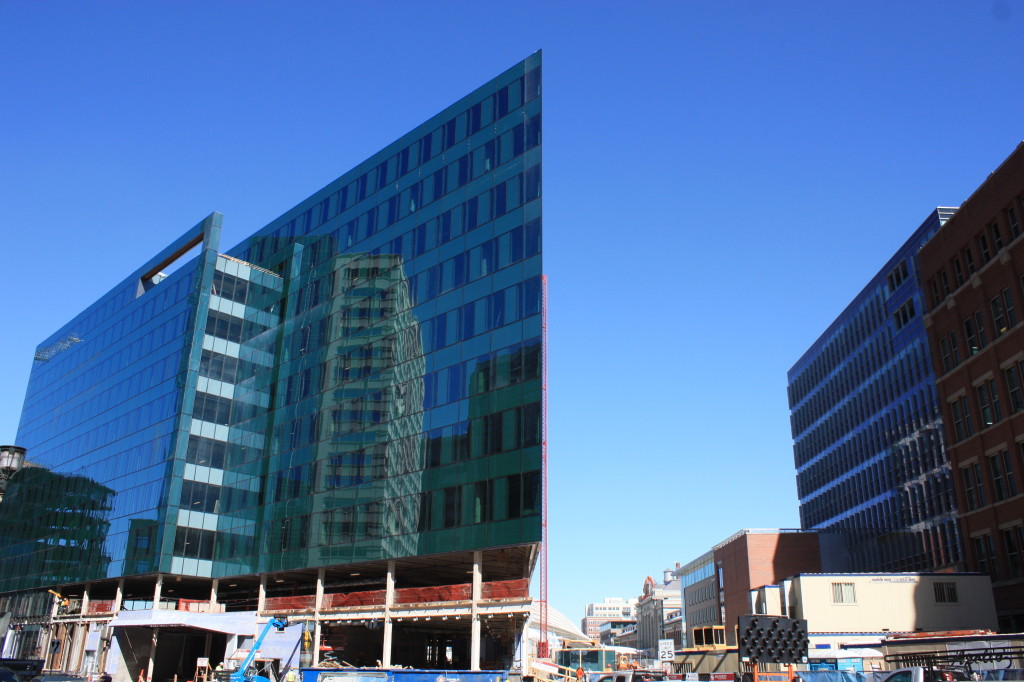 The open space between the Triangle building and the Environmental Protection Agency building (pictured on the righthand side of the photo) is where a cycling station will be located. Currently construction materials are located in the space. This space is actually the right of way for Wewatta Street. A deal was made between the City of Denver and the Triangle Building’s developer East West Partners where underground parking for the building would be constructed underneath the Wewatta Street right of way as long as the developer placed a bike station on top of it. This was important because of the unusual triangular shape of the property. Triangular lots do not lend themselves to being ideal for underground parking structures. Liberty Global recently announced it will be leasing the top three floors of the Triangle Building. 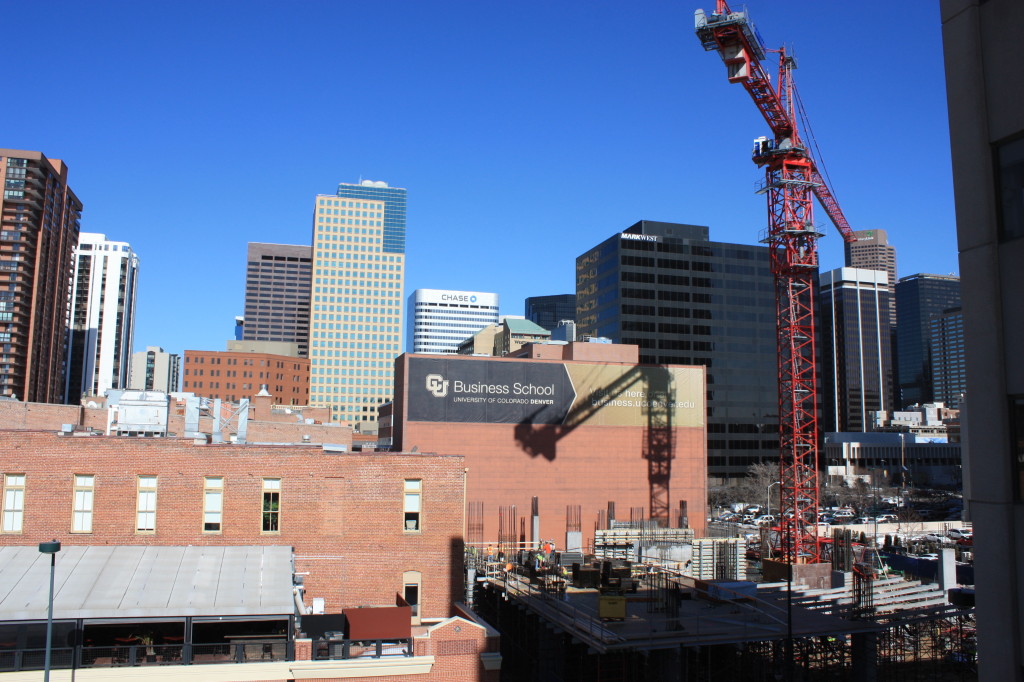 Above grade work is taking place on the 22-story 1401 Lawrence office project.National law firm Polsinelli has signed a 15-year lease to become the signature tenant of the building. 1401 Lawrence will have an outdoor space located on the 9th floor for its tenants. 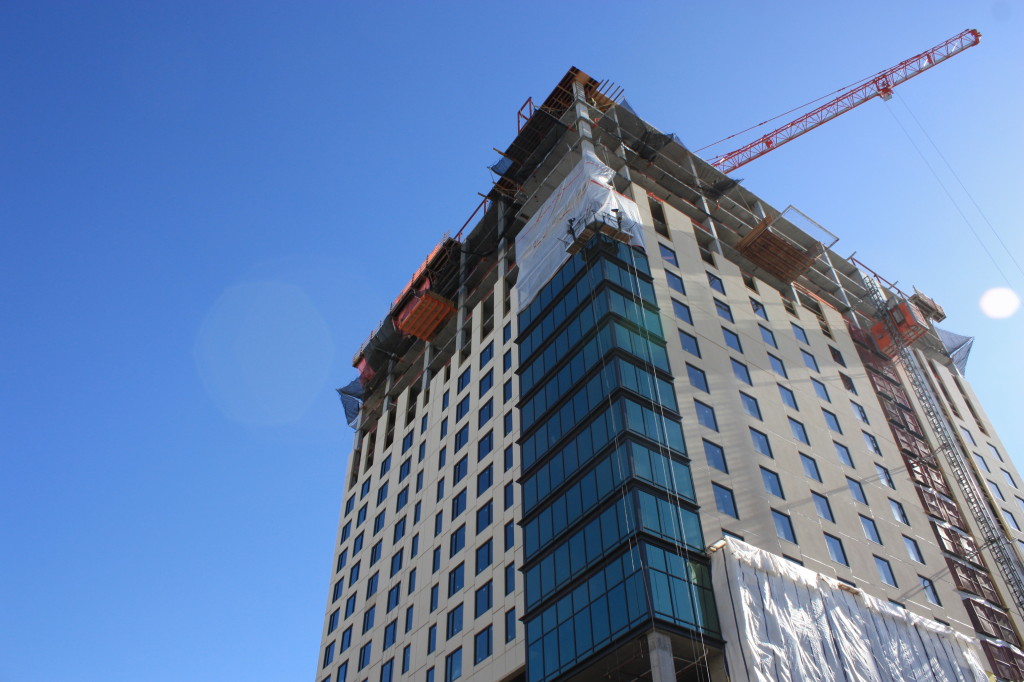 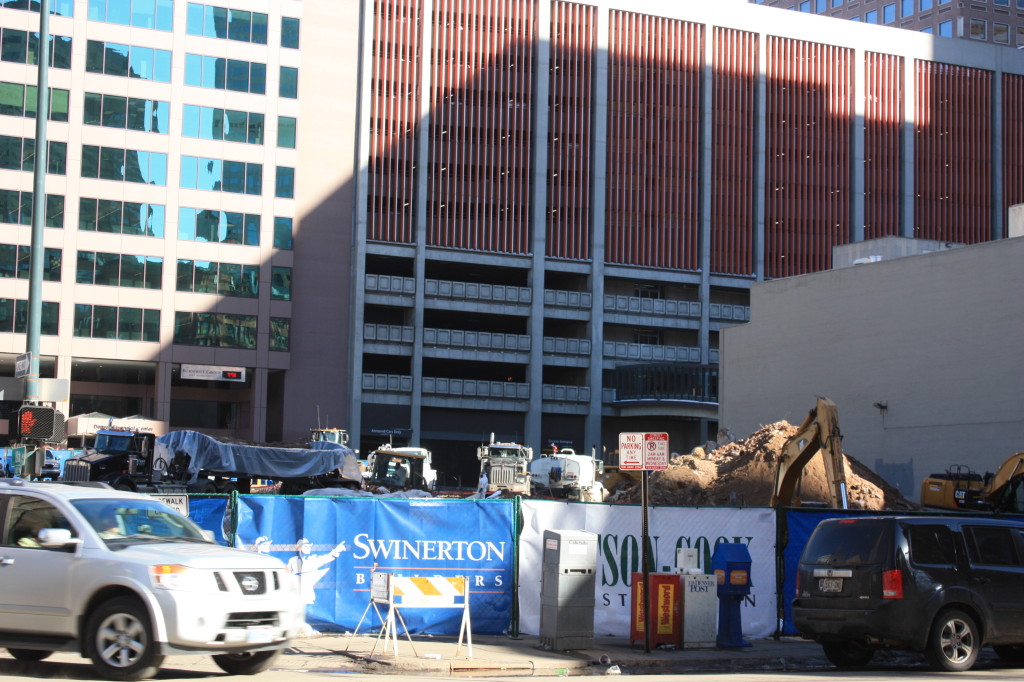 The 26-story SkyHouse Denver apartment project is underway at 18th Street and Broadway. 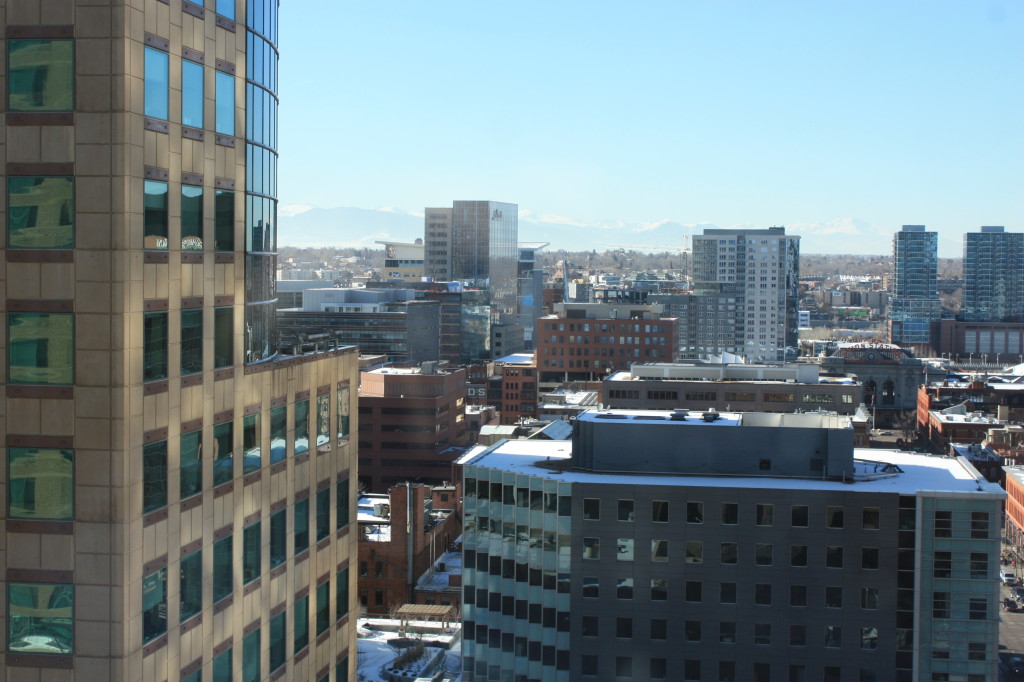 A photo looking northwest towards Denver’s LoDo and Union Station neighborhoods. All of the prominent building on the horizon have been constructed this century starting with the Glass House residential towers on the far right of the photo. The next building to the left is the 21-story Platform at Union Station apartments and to the left of that is the 19-story office building- 1900 16th Street.

The photos in this set were all taken in March of 2015 by Denver Urban Review.